In her production – Helenè Bester sings Nana Mouskouri – Helenè Bester pays tribute to the iconic Greek singer. Bester’s production was launched to great acclaim at the Oppiwater Arts Festival in 2019. It was written and directed by Frans Swart of Lefra Productions and Heinrich Pelser, who is Helenè’s accompanist during the Mouskouri shows, did the musical direction. The production will be on stage at the Roodepoort Theatre on Wednesday, 15 March 2023 at 19:00. Bookings can be made at www.roodepoorttheatre.com, or by calling (011) 472-1374 or (011) 674-1357. Helene Bester sing Nana Mouskouri is presented with the proud support of RSG, Sounds Good, Hollywood Costumes, Van Loveren Wines, Britz Couriers and Removals, Ambassador Execudrive and Lift.

Helenè says, “I have always hoped to do a Nana show. I am crazy about her voice and my sister and I grew up with her music”. “We really thought that she was a friend of my mom’s, because they look so much alike. I believe the time is ripe for me to do the show now, as I’m not sure I would have been able to interpret her music so well ten years ago. My voice is older and perhaps has a more mature sound, which I believe is favoured by her target audience. I studied her music videos to observe how she moved on stage, what she did with her hands and how she addressed an audience. One wants to be as credible as possible. Director Frans Swart agrees: “When Helenè approached me concerning this project, I was immediately excited. Who better than the talented Helenè to pay tribute to the timeless and elegant Nana Mouskouri?”

While studying Classic Guitar at TUKS, Heinrich started playing sessions for various bands and solo artists. He wrote and performed with the bands Ice Project and Frankie Fire, and played venues such as the State Theatre, GrandWest, the Standard Bank Arena, and the Main stage at Oppikoppi. He formed the instrumental group Awesome Foursome and performs with his wife Bianca as Lily and Bear. He produces and records music at his home studio in Clarens and performs solo in the Town Square restaurants. Heinrich is also currently working on the production Gitare – Cordoba tot Kraaifontein with Mauritz Lotz, which will be launched at the Oppiwater Arts Festival next year.

It was an exciting decision for Helenè to pay tribute to Nana Mouskouri. “Even today, Nana is still just as popular, because people of my age also listen to her music. We let her music live on. She sold 300 million records and can speak and sing in five languages. As a result, she is well known in so many countries”, says Helenè. “She is beloved among her fans. She is humble and does not jump up and down to promote her music. She made well-known songs even better known and every song she recorded, was a hit, e.g. Cucurrucucu, Only love, White rose of Athens and others. And OF COURSE, her daughter’s name is also Helenè – with the exact same pronunciation as mine. Which shows you, maybe she and my mom might be family yet!” 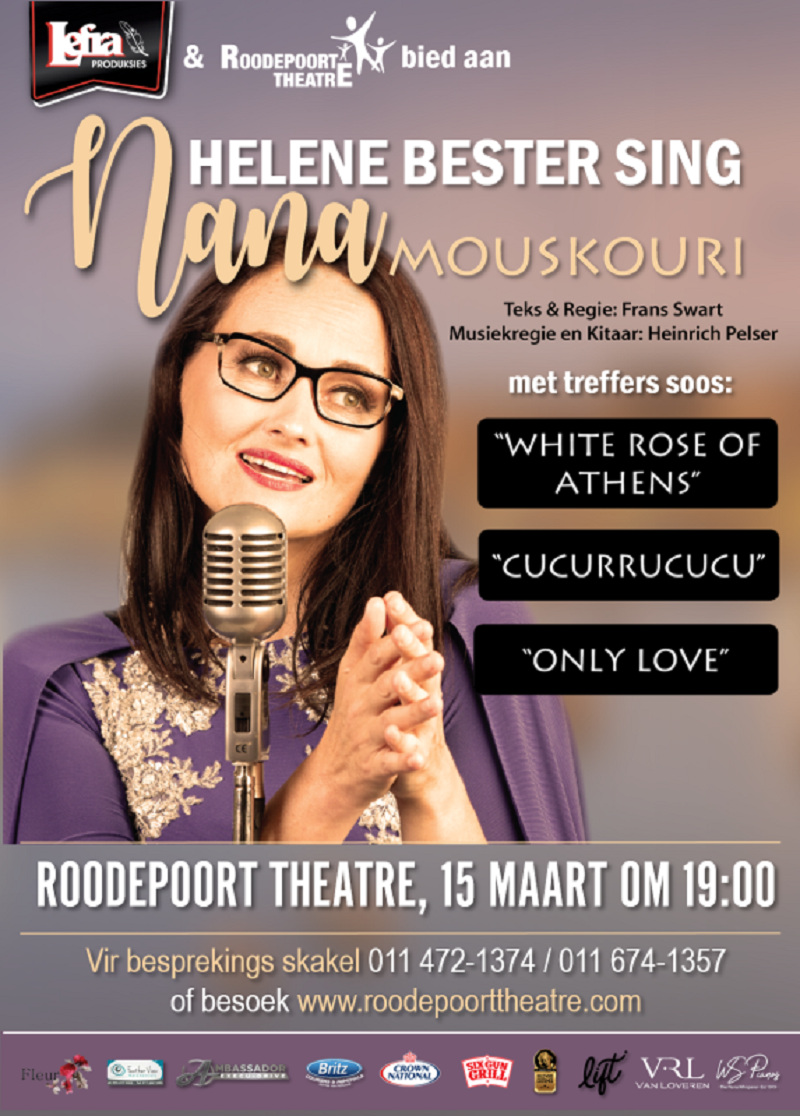